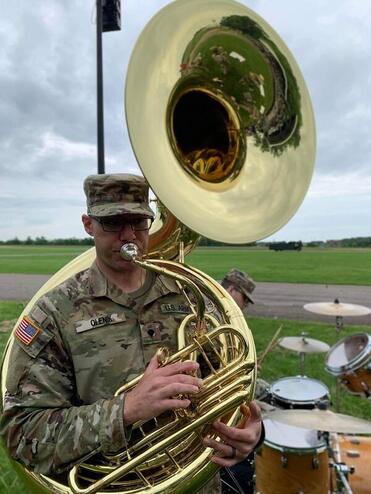 Douglas Olenik is a tubist for the 399th Army Band at Fort Leonard Wood, Missouri. He performs in the Ceremonial Band, Concert Band, and the Route 66 Brass Band. He is also a freelance performer, arranger, and educator.

Prior to joining the military, he was the Director of Bands at Ottawa-Glandorf High School in Ottawa, Ohio. He instructed bands in grades 5 through 12, teaching concert band, jazz band, marching band, pep band, and chamber ensembles. In 2019, the Titan Marching Band made its first appearance in six years to the OMEA State Marching Band Finals, where they received an "Excellent" rating. Douglas is currently on military leave from O-G.

Before teaching at Ottawa-Glandorf, he was the Director of Bands at Union College in Barbourville, Kentucky and instructed the Marching Bulldog Band, pep band, some music courses and private lessons.  Prior to his appointment at Union, he was the Adjunct Professor of Low Brass at Defiance College where he also conducted the Black Swamp Symphony Orchestra, assisted with the band and choral program, taught courses in music, and instructed private lessons.  He was also the assistant band director at Kalida High School during the marching band season in 2014. Douglas was also the principal tubist for the Urbana Pops Orchestra of Urbana, Illinois for 10 years during his time as a collegiate professor and public school teacher.

Douglas completed a Bachelors in Music Education at Youngstown State University and studied with Dr. Brian Kiser and Mr. John Turk.  He completed his Masters in Music Performance and Literature at the University of Illinois at Urbana-Champaign as a student of Mr. Mark Moore, and served as his teaching assistant for two years.  Douglas was working toward a doctorate of musical arts at Indiana University and while he was there, served as the Associate Instructor of Tuba and Euphonium.  He studied with Mr. Daniel Perantoni and with Mr. Anthony Kniffen while at IU.

Currently living in Missouri, Douglas teaches private lessons in the area.  When not with his tuba or his band, Douglas enjoys writing and arranging music, cooking and home brewing.  He enjoys spending time with his friends and family, as well as his wife, Bridget Olenik, whenever possible.